Come to this months CAPA meeting in Avon Saturday May 15

Come to the monthly CAPA meeting this Saturday May 15, 2010 and get your 2010 CAPA Big E application. Do not forget to stay to see CAPA Founder Brian Jud speak. Brian is a speaker you do not want to miss. I hope to see you all there.

Our meeting will be held in the
Sycamore Hills Park Community Center
Route 167, Avon, CT, 10:30 am – 12:30 pm
Speaker: Brian Jud - "Sell More Books in Large Quantities, With No Returns"

I recently taught a workshop on using LinkedIn and other forms of social media as job search tools for a re-employment group. Last night I was chatting with an incredibly
talented old friend who has found himself between jobs and it reminded
me that social media is now an essential part of the job-search
process. Human beings can be very helpful problem-solvers so let your
network…

Jason Alster Just a reminder that Jason Alster's interview about his new book "Leaving Home, Going Home, Returning Home: A Hebrew American's Sojourn in The Land of Israel" will be with Don McCauley of the Author's Show…

Finally getting up to speed with the current trends

This past Monday, I finally took the time to create an additional "Blog" (Additional to CAPA's, that is). It's a Blog about 19th century women's fashions -- one of my specialities, thanks to many years experience working in Mystic Seaport's costuming shop. I'm trying to post something every day, beginning with those mysterious undergarments -- the thing that gives a 19th century woman that "hour-glass" figure.

However, as of this writing, it hasn't been discovered/visited by…

Author interview on The Authors Show with Don McCauley

Hi fellow CAPA authors. I just gave an author interview with Don McCauley from the Authors Show. After the interview for my new book " Leaving Home , Going Home , Returning Home " ( with Amazon.com) , I asked him if he wanted other new book authors from CAPA to contact him. He said a definite YES. Tell him you heard from Jason. http://www.theauthorsshow.com The Authors Show .

Award-winning writer Adele Annesi has two short stories published in literary magazines. "Entertain Strangers," about lost opportunities, appears in Issue 9 of 34th Parallel and is available at Lula. "All the Pretty Places," about the cost of second chances, appears in Tertulia Magazine and can be viewed at… Continue

According to a few books I have read on the subject of increasing book exposure and sales including in the book "The Step - By Step Guide to Self-Publishing for Profit" by C. Pinheiro , a great technique is to get book reviews. It can even be more cost efficient than paid advertisement. Especially if you are marketing your books / books with Amazon.com there is allot of support for book reviews and reviewers. I myself place a review on every book I read with Amazon.com. As I just published a… Continue

I spent most of July having, what my surgeon referred to, as my first vacation in twenty years. But I can't kick because, in spite of the fact that I am still walking around still like an old lady, I found that I don't have cancer and that's a great thing.

So, I am back at work finishing up the Poodle book which will go on pre-sale in a couple of weeks. I have had fun… Continue

Award-winning writer and editor Adele Annesi is launching a new website, AdeleAnnesi, on the theme of place as inspiration to complement her Word for Words and Writing Linx blogs for editors and writers. Pass the new venue along to your writers’ group, and visit the site to leave a comment on the… Continue

Continuing with our Summer Pot Luck Meetings, we met on July 20 on my back deck. We hit a milestone with the number of people present, 33. This number does include spouses, special friends, etc. We had 4 prospective members including a 9 year old girl who loves to write. Out guest speaker was none other than Brian Jud, who was accompanied by his lovely wife Nicki. I think Brian casts a spell on the audience, because nobody moved during his entire speech. As only Brian can, he captivated the… Continue

On August 2nd, at the Millrace Book store in Farmington, Ct., I will be giving a talk on Earth changes. The talk will focus upon the research, observations, and conclusions reached in writing Truth Never Changes: Earth Changes over a 30 year period. Commonly referred to ‘The End-of-Days’ or ‘End-Times’, the phenomenon know as 2012 is arguably the seminal event of the new millennium. It is equated with the beginning of the Age of Aquarius on 12/21/2012. Come and hear what to expect and what… Continue

Hi Adele - congratulations on your being elected to CAPA's board as Publicity Editor. All Best, Lois Mathieu (CAPA member)

A Week of Autographs. 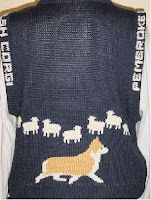 A Busy Week - Full of Books
"Autograph Anyone?"

The week has been filled with lots of exciting adventures as well as the day to day routines. To begin with, I approved the printing of The Crafty Welsh Corgi Knits - Pembroke and Cardigan. I had a lot of fun creating this book and it is dedicated to my late friend John Lang who was a longtime obedience club member and who had a amazing bond with his Pembroke Welsh Corgis over the years.… Continue

Writer-Editor Named to CAPA Board

Award-winning editor and writer Adele Annesi has just been appointed to the board of the Connecticut Authors and Publishers Association (CAPA) as publicity chairperson. Adele has been a member of CAPA for the past five years, and contributes the Connections column to the association's monthly newsletter, "The Authority." She will work with the CAPA board to promote projects such as the yearly CAPA University conference and the Big E Eastern States Exposition, as well as other CAPA members… Continue